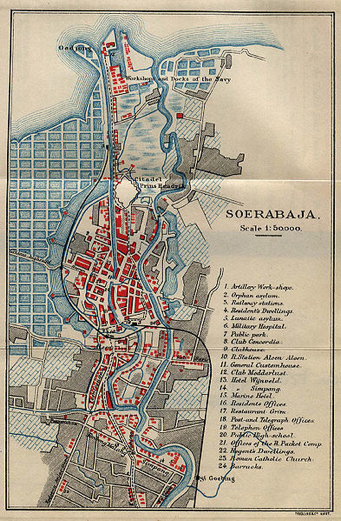 With the recent news of SPK International going to Surabaya and Mount Bromo, here are some facts and my hopes and expectations for the trip!

We start things off by giving a little history and facts of the city of Surabaya!

Surabaya is known as the cities of Heroes or Kota Pahlawan in Indonesian The earliest record of Surabaya is from the Chinese book from 1225 called Jung-ya-Lu written by Zhao Rugua.

The name Surabaya is based on the legend about a Shark named Suro and a crocodile named Boyo who fought to control the area. Both finally agreed that Suro would have control over the water and Boyo over the land. But one day, Suro went into a deep river estuary and Boyo, who was very territorial, got angry, and both argued again and they went into to a fierce fight, with Boyo coming out as the reigning champion.

Another story that could’ve been the origin of the city name is that there were two heroes named Suro and Boyo who fought in a war to get rid of invaders.

The Battle of Surabaya, one of the well-known battles of the Indonesian revolution, started after the Arek-Arek Suroboyo killed the British Brigadier Mallaby on October 30, 1945 near Jembatan Merah , allegedly by a stray bullet. The Allies gave an ultimatum to the republicans inside the city to surrender, but they refused. The ensuing battle, which cost thousands of lives, took place on November 10, which Indonesians subsequently celebrate as Hari Pahlawan (Heroes’ Day). The Dutch flag at the top of Yamato Hotel’s tower was torn into the Indonesian red-white flag by Bung Tomo is also recorded as a heroic feat during the struggle of this city.

From my past experience, Surabaya is a really nice place. Even though there might be traffic jams here and there, it is not as bad as Jakarta’s traffic jams. The place is enjoyable as it’s the capital city of Central Java, so of course there will be shopping malls and good places to eat.

Next up is Mount Bromo, an active volcano located near the Tengger massif in East Java. While it is not the highest peak of the massif, it is the most famous of them; Sulfur inside the volcano is collected by local workers.

So what can you expect on Mt. Bromo? Well, other than the freezing cold temperature up there, expect to be scared because the volcano I still active. The Indonesian Department of Volcanology has issued several warnings so tourists can stay safe.

The mountain is also very tall. So people, if you’re are afraid of heights, please beware of what situation you’re going into.

Other than that, prepare to stock up some warm tea and jackets so you won’t get cold up there.

If we’re going to talk about what I wish won’t happen, it would be the volcano erupting right in front of our eyes!